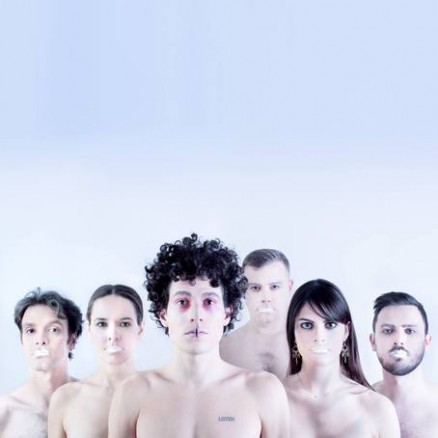 Emanuel and the Fear + The Brackish + Sink

“Emanuel and the Fear is a six piece group from Brooklyn. You might call them a chamber pop band, but a surprising and eclectic one.” – Soundcheck, WNYC.

Brooklyn-based Emanuel and the Fear is a collective of musicians with backgrounds in contemporary classical, metal, jazz, and folk music, all who happen to play rock music. The Guardian has described them as “like Rachel’s wigging out to Zeppelin while in the background Steve Albini tickles Michael Nyman into submission . . . [with] enough orchestral synthesis to make ELO blush”. And Vice Magazine says “tons of acts play this kind of Indie-Pop-Classical mix, but Emanuel and the Fear do it better”.

While their debut LP, Listen (2010), launched their massive electro/orchestral sound with a sold out event at NYC’s Gramercy Theater featuring a 30-piece orchestra, in recent years they have pared their personnel down to six core players, based around principal songwriter, Emanuel Ayvas. In support of Listen, Emanuel and the Fear toured extensively in Europe, all while developing the songs that made up their second EP, Hands (2011).

By the end of January of 2012, Emanuel and the Fear had crisscrossed Europe again to workshop the material that would become their second LP, the self-produced The Janus Mirror (2012). “Represent[ing] some astounding gut-punches that are enough to leave just about anyone reeling, demonstrating a potential that could make them untouchable” (PopMatters), the analog synths, overdriven guitars, and chamber string arrangements of The Janus Mirror contributed to a sound that harkened back to progressive rock with an undeniably modern lyrical sensibility.

Now, having spent the last two years recording in various studios, apartments, closets, and countries, Emanuel and the Fear have completed their third album, Primitive Smile, a collection of songs that soften the edge of their past work by drawing inspiration from indisputable songwriting icons such as Harry Nilsson, Paul McCartney, and Fleetwood Mac.

“Sometimes, you just need a break from the typical electric-guitar-driven rock quartet,” wrote Magnet. “Luckily, that break comes in the form of Emanuel and the Fear, [who take] the modern indie-rock sound and shake it up with a sweeping symphonic twist.” Happy to be considered “a band following its own star” (Drowned in Sound), Emanuel and the Fear continue to perform together and separately as live and studio musicians, as well as educators of the next generation of artists.

The Brackish are a thrillingly unique instrumental band formed in 2013, featuring alumni of This is the Kit, Zun Zun Egui and The Liftmen. At the core of the music are tight arrangements combined with improvisation, featuring interplay between two distinctive guitar voices. The broad vocabulary of the music – psychedelic, metal, jazz, kraut … – echoes Steve Reich, Sabbath, Can and Tortoise.