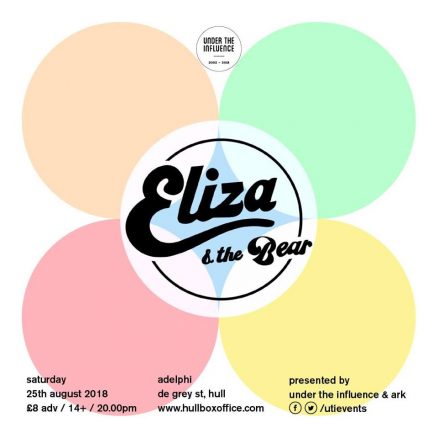 A four piece band from Essex who spent their first year together only performing in the close confines of a practice room in North London. One of the UK’s most promising young bands with guitar-driven indie-folk hooks reinforced by beautifully orchestrated horns, punctuated rhythms and the emphatic vocals of lead singer James Kellegher. Now looking forward to the release of their second album ‘Group Therapy’.

Eliza and the Bear didn’t plan to be a band. Not a real band, at any rate… (with) no intention of releasing records, never mind making an album. Hence, the band began as a hobby, a weekly meet-up of mates who loved making music, but only for fun. Which is important to know – because it’s key to understanding their sound. It’s why their songs are so joyous and their lyrics life-affirming. It’s why their trumpets are triumphant and their strings soar.

“If you go to an Eliza and the Bear gig expecting to see either a girl called Eliza or a bear, you’ll be sorely disappointed on both counts.

You might not know their unusual name, but you’ll definitely have heard their upbeat anthems accompanying all manner of TV shows and adverts. Their music was even featured on the BBC’s Olympic coverage – and it’s not hard to see why.

Their earlier folk rock sound established them as the kooky Essex lovechild of Mumford and Sons and Of Monsters and Men. However, a change of musical direction… has seen them verging into…lethally catchy pop” – http://www.mancunianmatters.co.uk/