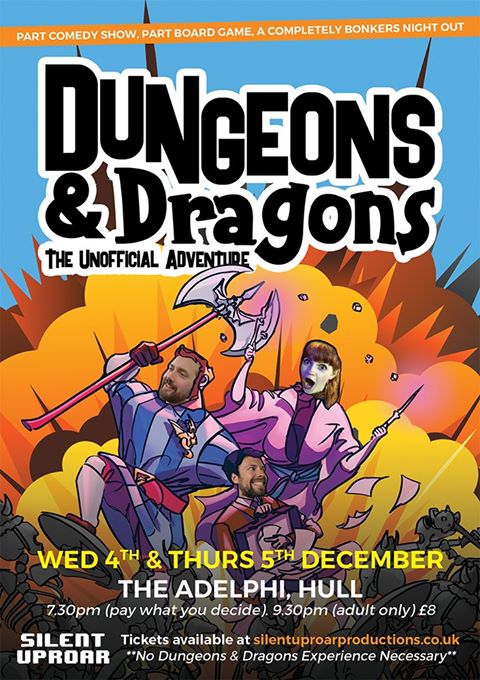 Part comedy show, Part board game. Full on bonkers night out!
‘Dungeons & Dragons: The Unofficial Adventure’ by Josh Overton is a family friendly and interactive comedy theatre show for anyone aged 9 to 99.

This December, come and join our band of adventurers and set out to save YORKSHIRE. Bring your family & friends to a comedy show filled with magic, monsters, and murder in equal measure. Brought to you by the award-winning Silent Uproar (A Super Happy Story About Feeling Super Sad) this bonkers and bizarre night out is perfect for fans of Rick & Morty, Community and D&D.

​Silent Uproar have taken the weird and wonderful world of Dungeons and Dragons and condensed it into a 70 minute theatrical adventure…with jokes!

WHAT MORE COULD YOU WANT?!

If you fancy braving some beasties, solving some mysteries and becoming a hero; grab your axe and come down to one of the venues near you.
Suitable for ages 9+, there are a limited number of adults only shows as well (for those that want a beer with their broadswords!)

PAY WHAT YOU DECIDE PERFORMANCES

We’ll be hosting a number of ‘Pay What You Decide‘ performances.
Reserve your place in the audience, but pay nothing in advance. Come and see the show and then pay what you think it’s worth once it’s finished. Whether that’s the price of a coffee, a meal out, or a new car!

Our late shows (9.30pm) are Adult Only performances. So leave the kids at home, join us for a beer and a slightly wilder (and no doubt more foul languaged!) version of the show!