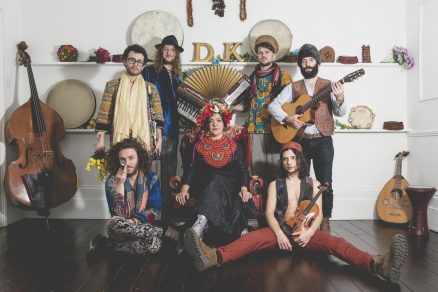 A musical world tour with Don Kipper, from London, plus a rare Hull show from acoustic roots duo Mambo Jambo.

Don Kipper are a multi award-winning 7-piece ensemble playing a wide range of traditional musical forms reflecting the cultural diversity of North East London, from Turkish and Greek Folk Musics to Romani music and Klezmer. While we attempt to root ourselves deeply in the traditions that surround us, we also like to bring these musical cultures together in innovative, exciting, and unusual ways that mirror London’s vibrant, cosmopolitan energy. We’re equally happy taking an intimate audience on a musical journey through Europe as we are taking their feet on a frantic journey around the dancefloor, at home both on large outdoor stages playing to a crowd of ecstatic dancers, and in sweaty tents getting the throng jumping.

Since 2013, we have released our First and Second albums, been featured on BBC Introducing and the BBC World Service, played two European Tours, and won the titles of both the Moshe Beregovski Award for best Klezmer Newcomers and World Music Network’s Battle of the Bands. If you like the Amsterdam Klezmer Band, Taraf De Haïdouks, or Balkan Beat Box you’ll love Don Kipper!

“Sure to send shivers down your spine”

“The true sound of our capital”

We are very lucky tonight to have a rare Hull show from acoustic roots duo Mambo Jambo. Presenting a bit of a musical feast, they will take you on an enjoyable and intriguing musical journey, mixing sounds from around the world, folk and jazz, plus their own compositions. Their repertoire draws in a wide range of styles that might include Bluegrass, Latin & Caribbean New Orleans, Balkan, and more. Blending all these influences they create an upbeat rhythmic and rootsy sound all of their own – with appeal across a very wide audience.

Between the two of them they carry with them more instruments than the average orchestra! Pete on guitar, vocal, banjo, percussion, tres (traditional Cuban guitar), ukulele, accordion, suitcase (!), and Frankie on saxophone, clarinet, flute, guitar, vocal and lots of percussion.