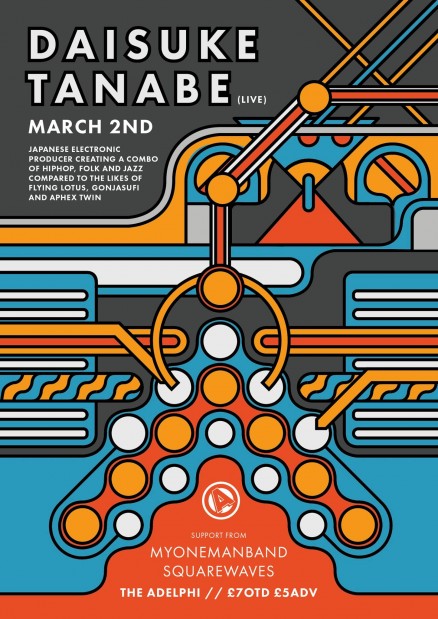 Daisuke Tanabe is a music producer from Chiba, Japan. The former art student who also lived and worked in London for some years is currently based in Tokyo, where he assembles his exceptional pieces of music. Originally coming from a techno/breakbeat background, Daisuke has developed his own style of production to create a distinctive sound between hiphop, electronica, folk and jazz.

During his time in the UK, he published for Gilles Peterson’s famous Brownswood label and performed together with Zero DB, some of the leading lights in the UK breakbeat scene. On a recent Japan tour with French hiphop instrumentalist ONRA, he once again knew to impress the audience with his unique melange of jazz, electronica and hiphop. When performing live, Daisuke succeeds in combining his instrumental tracks with hiphop acappellas and creates an extraordinary atmosphere.

Compared to the likes of Flying Lotus, Gonjasufi and Aphex Twin

In support we have improvised electronica from Myonemanband and Squarewaves.

SquareWaves is an improv collective of Hull electronic artists. Originally brought together by a compilation album, now operating as a collective with an ever changing line up for live improvised electronic music. The sound is electronic, IDM, ambient, noise, drone, experimental, drum & bass… It changes every time depending on who is part of the improv.