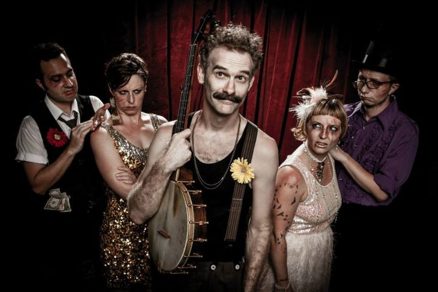 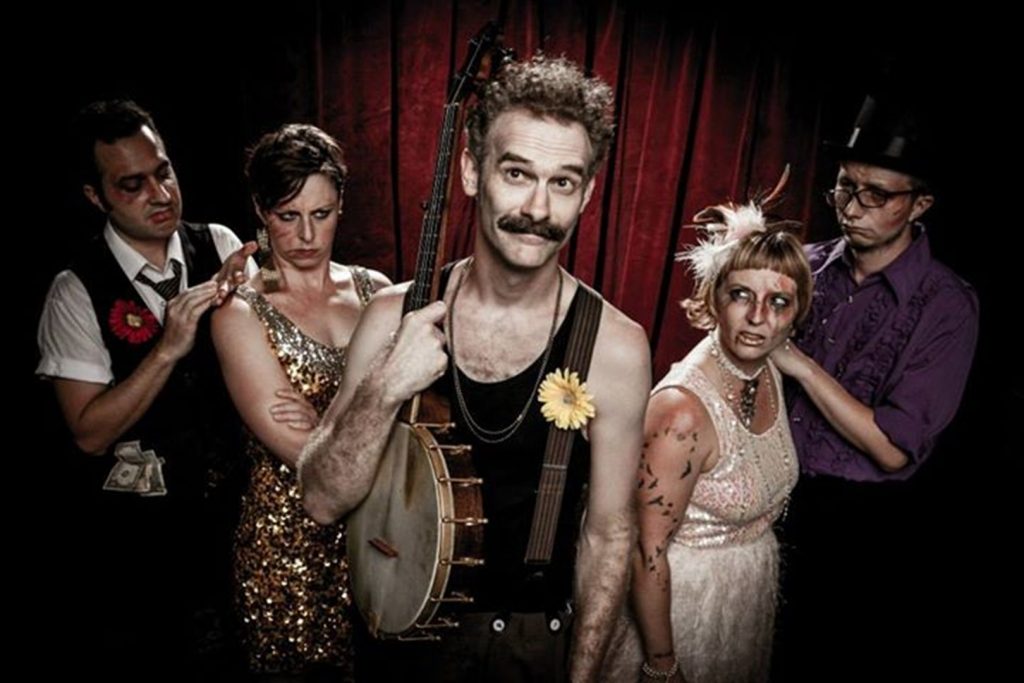 Curtis Eller is a banjo player, songwriter and rock & roll singer. After beginning his show business career at the age of seven as a juggler and acrobat, the Detroit native turned to the banjo and lit out for New York City where he rose to obscurity as “New York’s angriest yodelling banjo player”. Citing Buster Keaton, Abraham Lincoln and Elvis Presley as his primary musical influences, Eller became a staple of the beer halls, burlesque houses and underground theatres of the eastern seaboard.

Eller relentlessly tours the US and Europe with an expanding and contracting cast of misfits, The American Circus. The latest version of the ensemble is a brutish and inelegant rock & roll outfit specializing in banjo music for funerals, gospel tunes for atheists and novelty dance fads for amputees. A lavish, Hollywood, dance sequence unfolding on the floor of a Chicago meatpacking plant in 1894.

The group’s latest phonographic recording, “How to Make It in Hollywood”, is a compact collection of glittery show tunes, sentimental tear-jerkers and rock & roll rave-ups whose lyrics are populated with two-bit prize fighters, Hollywood has-beens, lapsed gospel singers and forgotten pop stars.

Lace up your dancing shoes!

Support by The Dyr Sister:

Hailing from the City of Hull in England, Sally Currie is The Dyr Sister (pronounced deer, it’s Old Norse) and that most wonderful of things, a true and pioneering individual. As a multi-instrumentalist she conjures up surreal tales with the aid of a viola, a mandolin, her voice and an array of live samples.

Sally performs her catalogue of haunting, ethereal modern day folk songs as a one-woman band, portraying a fascinating canvas of sound and beats as she goes. Her original and innovative pieces are influenced by a wide range of genres from jungle and dubstep through trip hop and hip hop and ending somewhere deep amongst the many varieties of traditional folk music from around the world.

Known as an authentic musician with rich blues vocals, over the past 4 years Sarah Shiels has been making a name for herself. She has gigged extensively across the UK and Internationally, initially playing locally with her first band The Velvet Dolls, going on to play the likes of Seattle, Spain and Germany with ex blues-punk band Ming City Rockers, the likes of Cornucopia with the acclaimed Jackson D and blues festivals with Rivers Johansson. Recentely she has embarked upon a new project of psychedelic folk and blues with a new band, consisting of Halcyon Neumann (The Body Farmers), Rivers Johansson and Neil Fox (ex Sea of Wires), debuting at Beverley Folk Festival.