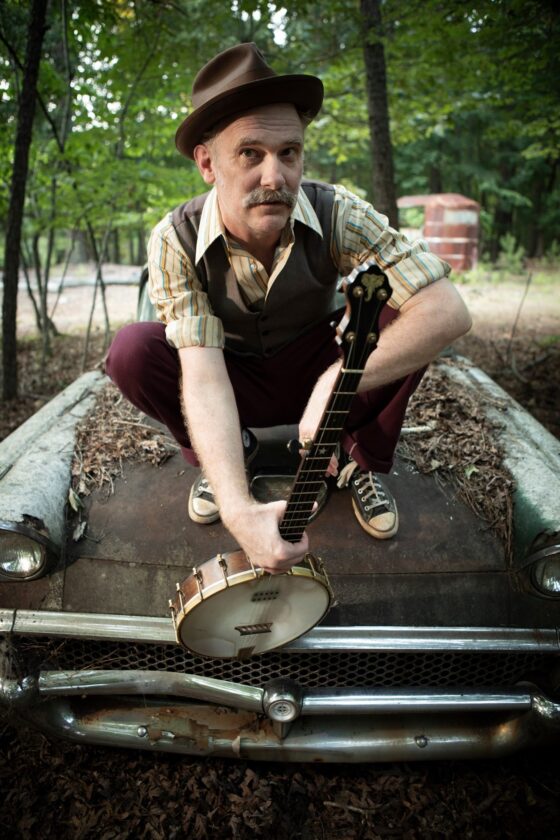 Curtis Eller is a banjo player, songwriter and rock & roll singer. A twenty-year show business veteran, Eller and his band The American Circus have developed a devoted international following based on dynamic, highly physical stage performances and an extensive catalog of curious phonographic recordings. The iconoclastic musician has spent more than a decade relentlessly touring the club, theatre and festival stages of North America and Europe.

Eller is a gifted and prolific songwriter who’s banjo-driven songs describe a dreamlike vision of American history where all points in time have collapsed into one. The band is thrilled to announce the release of their latest and most ambitious full-length album, A Poison Melody, on which they have augmented their indelicate, rock & roll rhythms with a tempestuous cloud of horns and a graceless choir of backsliders in their quest to bring Eller’s historically evocative compositions to vivid, cinematic life.

“Curtis Eller finds the middle ground between silent film The General and a banjo-packin’ Jello Biafra. Eller’s songs are an American History 101 course in waking life.”

“As a songwriter he’s created a unique lyrical world backed with razor sharp banjo playing. As a live performer he’s simply remarkable – a whirlwind of chaotic charismatic that leaps off the stage & whips through the crowd.”

“Go and see Curtis Eller. One day, you’ll be able to say you saw him in a tiny venue before he was huge.”

Sarah Johns Music Party is from the North of England.  Her stripped back, organic, drum, guitar and vocals, give her work an immediate and honest feel that is at once comforting and yet unnerving. Her music recalls the purity of Lykki Li, the rawness of Scout Niblett and the musicality of Tune-Yards.

Sarah Johns is influenced by nature, with much of her work echoing the repetition of 19th Century American black and white Christian Spiritual Song. Sarah Johns Music Party’s live performance continues this likeness by exploring the therapeutic and meditative effect of music upon the audience, mindful of the ritual of people coming together to listen to and play music.

Inspirations: Stop Making Sense (The Talking Heads live video), 808 drum machines, Hermann Hesse, Samba, cheerleaders, ceremonies, games with rules, the bit where it all comes together in jazz and the bit before and after, Oh Lord Won’t You Buy Me a Mercedes Benz, Salt-N-Pepa, Laurie Anderson.