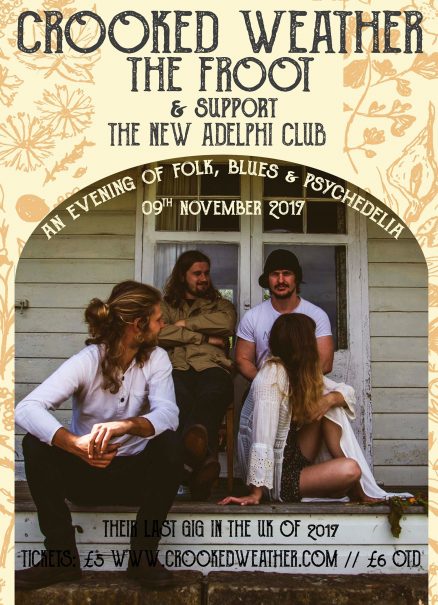 Crooked Weather
Based out of a tragic mustard coloured 1979 campervan, East-Yorkshire, Crooked Weather play rock infused folk music. The sound is lead by carefully crafted lyrics delivered by the lilting harmonies of Holly and Will. Their original music, although steeped in the folk revival of the 60’s and 70’s, has a raw, modern edge and is augmented by Tom & Dave: a fierce rhythm section.

In the last 2 year they have toured the lengths and breadths of Ireland, New Zealand, U.S., England and Holland. Thirsty for the road again, they are releasing a single and playing their last U.K. show before an extensive Southern Hemisphere tour. Join them for the release of a new single at what will be their final performance in the UK for quite some time!

THE FROOT are a 4 piece all original band from Hull, with their music cemented in the progressive psychedelia vibe of the late 60searly 70s. Influences include The Doors, King Crimson, early Alice Cooper, Beatles, and Syd Barrett era Pink Floyd.
They are now currently working with Colin Lloyd Tucker of The The, on their new album alongside engineer Kenny Jones, who’s recording credits include The Smiths, Oasis & Nine Below Zero.

Hull based honey voiced troubadour TIM MELLINS delivers heart felt songs that draws the listeners in. He also has the enviable title of being the finest whistler in the whole of Yorkshire.