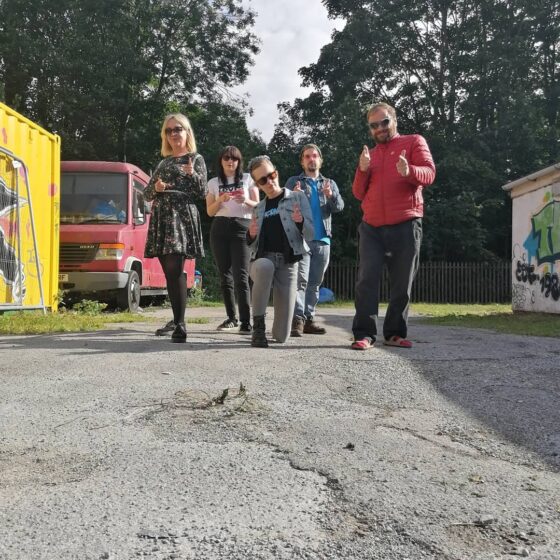 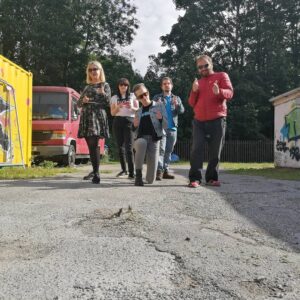 A Hull SUPER-GROUP formed in the Adelphi carpark during lockdown # 1.

Featuring members of Bunkerpop, The Dyr Sister and Fire (TUF). Chubby Mam tell tale of seedy hostels in Cleethorpes, International Pig Slicing and arguments with religious cults. Like if Belle & Sebastian were goths. The darker side of proper indie with glockenspiel, viola, melodica, guitar, bass and drums. Chubby Mam have played the Fast & Bulbous Festival blowing the minds of the feeble and weak. Political rants, cursing from the lips of ladies and passive, aggressive audience taunting are not uncommon at a Chubby Mam show.

The Yons – Pioneers of the Erewash Sound, rocking your world since 1987
Timeline: April 1992 Location: Bobby Brown’s, Mansfield Road, Nottingham
As legendary Nottingham band The Yons trooped off the stage leaving the audience exhausted and exhilarated after another blistering set, few could have predicted (who would have wanted to?) that this would be the last anyone saw of the band. Few, that is, except the band themselves. Yes they had never sounded better, tighter. Yes the new number, Get Me Into Country, had seen the crowd explode in a frenzy. Yes the rhythm guitarist’s inability to tune a sodding guitar properly made the thing I just wrote about them never sounding better a bit wide of the mark. But pressures within the group were pulling the members apart, calling them in different directions….
Timeline: Today
25 years on and much has changed. Where Bobby Brown’s once stood, beckoning thrill hungry music lovers in through its doors, there is now a board game/trading card cafe. Offering a range of Chad Valley type experiences, it’s a one-stop shop for all your cake and board game needs and they can tailor your consumer experience to your requirements. They might even have Totopoly. But I digress…
The world may have turned many thousands of times since that night at Bobby Brown’s, but The Yons never really went away. To the band members The Yons always felt like unfinished business. Rumours of reunions occasionally surfaced over the years but nothing concrete emerged. In the background, however, guitarist Vinnie had been harnessing 21st century technology to revisit and revamp old tunes and craft new ones encouraged and aided by bassist Al. When vocalist Jon and drummer Paul heard the results they knew that they had to be on board. The team was nearly complete. Nearly, but not quite.
Old college friend, Yons fan and legend in his own right Chris Morgan (of The Deddingtons, Saltbox and Reporters fame) wanted in and the rest of the band knew that he would complete the picture, so in he was, both feet. Now work could commence in earnest.
So The Yons are back in the rehearsal room, soon to be back in the recording studio and, most importantly, soon to be back on stage. It’s been 25 years but it’s like they’ve never been away.

Pete Drake is a singer songwriter poet from Haxey. He sings comedy folk music tinged with heartbreak and madness. Accidental discoveries, badly paired socks, animals and nasal advice all feature as song subjects in this somewhat unique act. So, expect the unexpected. His influences? Pete says “I quite like Del Shannon and Prince.”.