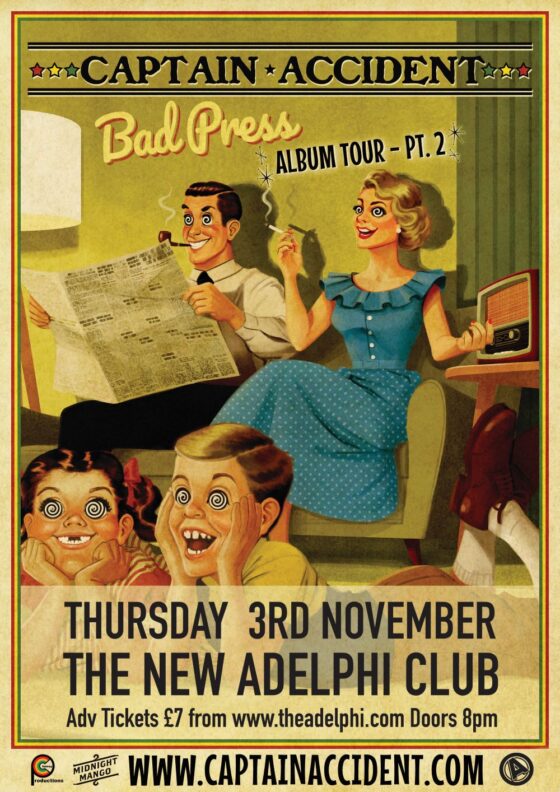 Captain Accident is a reggae/ska/soul artist who creates a unique blend of rock-driven soulful roots reggae, ska, dub and rocksteady at his home studio in Cardiff. This sound is then brought to life on stage with the help of a collective of the finest musicians known as “The Disasters” although in reality, they are far from that! The energetic live show is guaranteed to get people up and dancing. With soulful vocals, soaring twin guitars and a truly infectious groove, there’s no standing still when Captain Accident and his clumsy companions hit the stage.

Captain Accident currently has 4 self-produced albums under his belt: “Pick up the Microphone” (2010), “Slippin Up” (2013) and “Wake & Break” (2016) & the critically acclaimed “Bad Press” (2021) which has received great reviews and praise, including that from the legendary David Rodigan on his BBC Radio 1xtra Reggae Show.​

Captain Accident and The Disasters were hand-picked to join reggae heroes Toots & the Maytals for a run of dates on their 2016 UK tour. After impressing the reggae legends, their fans and their agency, the band were then invited back out as full-tour support in 2017 and 2018, taking them to some of the UK’s most prestigious venues including London Barbican Theatre, Brighton Dome, Manchester Academy, Nottingham Rock City and more. During Toots’ 2017 “Bands in the Sands” appearance, the Captain was asked to join the band onstage to perform Monkey Man on guitar! The band were then asked to go on a full European tour with Toots & the Maytals in 2020 but this was postponed due to covid 19 and subsequently cancelled following the death of Toots Hibbert.

As well as Toots & the Maytals, CA & the D have shared a stage with many of the biggest names in reggae & ska including: Suggs (who recently jumped on stage to sing with the band!), Alborosie, Less Than Jake, Aswad, The Skints, The Skatalites, Bad Manners, The Toasters, Neville Staple (The Specials), Fishbone, David Rodigan and countless others. They have become a staple part of the UK festival circuit, appearing at Glastonbury, Wilderness, Bestival, Secret Garden Party, Boomtown Fair and several others.

With a full UK Album tour & healthy Summer of festivals already planned (including the legendary Rototom Sunsplash in Benicassim, Spain) and a series of new music videos planned, 2022 is looking exciting for Cardiff’s clumsiest reggae artist and his hazardous sidekicks!​

Rolling Over are a 4 piece modern funky soul band hailing from Gods own country, originally a 2 piece folk outfit transformed to a full band set up, with a full new set of songs with narrative driven lyrics, soulful singing and the grooviest drum and bass to get those feet moving, with a wide variety of musical styles played throughout, one foot is always firmly planted in those funky roots! Fresh new songs never heard live before guaranteed to drive you out your seat and onto the dancefloor!