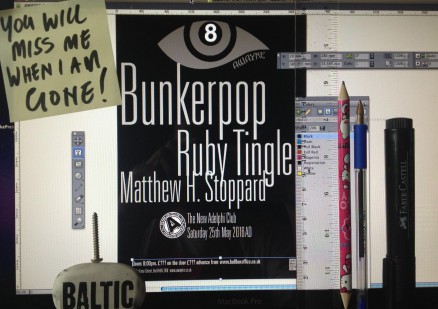 Mr Paul John Sarel is leaving the country to live in a van with his wife and kettle on the mainland of Europe. The van is red. This will be his last group performance for some time in the UK and we are full of joy to have the opportunity to host this wide collection musicians of such fine nature. So it is a goodbye…

… and a hello again.

RUBY TINGLE last performed for AWAYKE in December 2015… she was stunning.
Ruby is based in Manchester and works as a multidisciplinary artist in collage, performance and music. AWAYKE 8 will hear her soaring piano and vocal based pieces tell tales of fish gods, bull men and intimate amphibian relations; her songs forming semi fictional narratives based on folkloric transformations and embellished personal experiences.

MATTHEW HEDLEY STOPPARD lives in Otley where he is the first-ever official Town Poet. Matthew read for us last June as a support to The Cesarians. He received a standing ovation and he deserved it he was brilliant. He has two collections of poetry published by Valley Press and his poems and stories appear in various magazines and anthologies, both in print and online, and on green vinyl disc released by Adult Teeth Recording Company.

After this we shall sleep until the Autumn whence we will awaken for the nine!