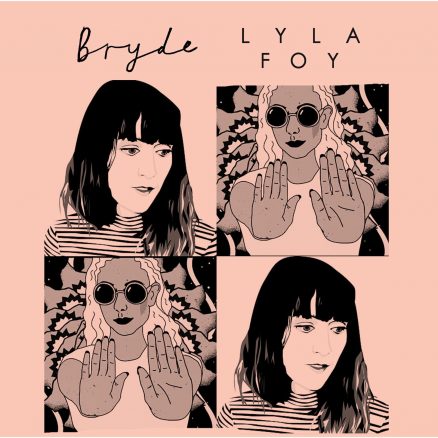 Under The Influence presents Bryde and Lyla Foy Joint solo tour, with support from Crooked Weather
Pembrokeshire-born, London-based BRYDE is a woman with an electric guitar, playing fierce and fragile songs.
Swaying from vulnerable to uncompromising within one verse and chorus, Bryde’s music is honest and furiously authentic.
Fascinated with human psychology and inner workings of relationships Bryde’s songs still hold close a defiant and life-affirming quality. Described as being about “entangling and unravelling” it moves from tender and delicate, to tough and unforgiving, drawing reviews that reflect this.
Bryde established her ethereal indie-rock sound early on, working with producers such as Jolyon Thomas ( Royal Blood) and Bill Ryder-Jones (Hooton Tennis Club, Our Girl) Radio support has reflected this coming from the likes of Huw Stephens on Radio 1, 6music, playlists on BBC Radio Wales and Amazing Radio and supported by Maz Tappuni on Radio X.
Now in 2018 the debut album Like an Island mixed by Catherine J Marks (Big Moon, The Amazons) has been released to a host of glowing reviews, citing comparisons to Radiohead, The xx, Warpaint and Jeff Buckley. The album reached No. 38 in the Official Indie Chart. Accompanied by another sold out London show (this time at Omeara) and a 35 headline tour of Europe followed by a long list of summer festivals and support shows with Joy Formidable, Bryde is on a roll and appears to have no intention of slowing down.
LYLA FOY performs intimate, melodic pop music. Coming from humble recordings made in her kitchen, her first EP, ‘Shoestring’ came out in 2013. This lead to her debut album ‘Mirrors in the Sky’ in 2014 which was supported by international touring, sharing stages with The National, Sharon Van Etten, Midlake and Phosphorescent. In 2015 she released her ‘Umi’ EP and some more touring followed. After taking a step back to form a new band, consisting mainly of women, to help realise a new vocal-heavy sound, Lyla did a short tour in summer 2017 with Fleet Foxes. New album ‘Bigger Brighter’ was released on September 14th 2018. While the album was made with long time collaborator Oli Deakin from Low Pines, it sees her first foray into singing collaborations: Jonathan Donahue from Mercury Rev lending his otherworldly vocals to lead single ‘Far Behind You’ and John Paul White from Civil Wars crooning beautifully on ‘Bring Flowers’.
You may also know Lyla from psychedelic 6 piece Mono Club, fronted by Goldheart Assembly ex-frontman, John Herbert, in which she sings and plays bass.
CROOKED WEATHER a rock infused folk band, based out of a tragic mustard 1979 campervan. They hail from the depths of East Yorkshire, with the lilting harmonies of Holly & Will at the core. Their original music, steeped in the folk revival of the late 60’s, has a raw, modern edge.
“They are indie meets world music meets traditional British folk. Think a contemporary Incredible String Band with a 21st century mindset.” – Sid Griffin (Bob Dylan Biographer // BBC Radio 6 Music)
Doors 8 pm
£6 + BF from Hull Box Office and seetickets
This website uses cookies to improve user experience. Please confirm that you accept the use of cookies. More information can be found in our cookies policy. Find out more.