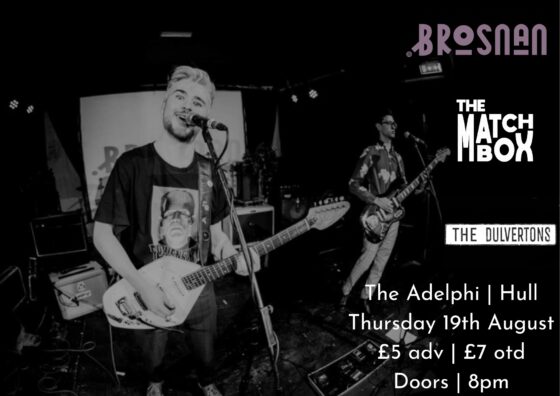 Brosnan + The Matchbox + The Dulvertons

Brosnan + The Matchbox + The Dulvertons

The Matchbox
Deriving from a song by The Kooks – The Matchbox connect from across the UK to rally in Manchester, England. The band’s flares of Rock & Indie have been picking up steam and forced excitement in pockets across the country – with appearances at the likes of ‘This Feeling’ & ‘Made In Manchester’ this summer!

The Dulvertons
The Dulvertons are a British rock ‘n’ roll band formed in December 2019. All band members are from Kingston Upon Hull with two of the members brought up on a street called Dulverton Close hence the name.
The band is made up of Shaun – front man, Liam – Bass, Shane – guitar and Rob – Drums. Shaun is the writer for the band and draws his influences from the likes of Oasis, Stereophonics, Arctic monkeys and Kasabian.
So far the band have released two singles ‘Young and Foolish’ and ‘Could I Be Wrong’ and have recently released a demo called ‘Somewhere I Can Breathe’. Due to Covid the band missed out on their first gig by a matter of a few weeks and have consequently been a band for a year without being able to get out there. Nonetheless the band have not sat back and have instead built a solid fan base online. The band are looking forward to that first gig and are currently recording their first album.
This website uses cookies to improve user experience. Please confirm that you accept the use of cookies. More information can be found in our cookies policy. Find out more.