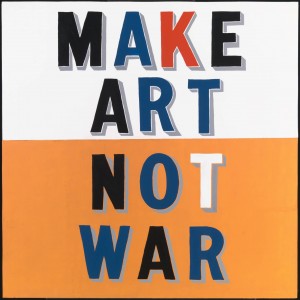 Bob and Roberta Smith (real name Patrick Brill OBE, RA) is a British contemporary artist, a lifelong protester, writer, author, musician, art education advocate and keynote speaker. He is known for his “slogan” art, is an associate professor at Sir John Cass Department of Art at London Metropolitan University and has been curator of public art projects, like Art U Need. In the 2015 general election, he stood against Michael Gove in his Surrey Heath constituency, in protest at the former education secretary’s marginalisation of the arts in schools. Bob and Roberta Smith is famous for protest art such as “Make Art Not War” and “Letter to Michael Gove” amongst others. He was curator for the 2006 Peace Camp and created the 2013 Art Party to promote contemporary art and advocacy. His works have been exhibited and are in collections in Europe and the United States. Brill co-founded The Ken Ardley Playboys.Brill hosts The Bob & Roberta Smith Radio Show called Make Your Own Damn Music on Resonance FM. His father is the landscape painter Frederick Brill who was head of the Cheslsea School of Art from 1965 to 1979. His wife is the contemporary artist and lecturer, Jessica Voorsanger.

Bob and Roberta’s Excellent Protest Adventure aired on BBC4 last year, a wry, opinionated and passionate investigation into the age of activism. In the documentary he travels among international protest movements, asking if occupations, direct action and marches are efficient in achieving results. The programme also considers whether the social media revolution is transforming modern protest and democracy. The film features interviews with an eclectic mix of experts, including Noam Chomsky, British philosopher Roger Scruton, musician and activist Billy Bragg and the latest celebrity protestor, anti-fracking activist Bez. Putting some of his newfound insight into the art of protest, Bob and Roberta Smith gets involved in grass roots activism by trying to help the village of Newnham save their local pub. He also travels to Reykjavik to meet the protesters who have ousted their Prime Minister and ask what happens when protestors succeed? Do they have what it takes to run a country?

This live performance is part  of “This is a Freedom of Expression Centre” – a Hull 2017 project with Hull School of Art and Design (HSAD) , running from 3 August to 5 September.  This project also includes a large new public artwork, workshops, talks and a Bob and Roberta Smith exhibition at HSAD, in collaboration with staff and students.
https://www.hull2017.co.uk/whatson/events/look-freedom-expression-centre-bob-roberta-smith/

Bob & Roberta Smith and the Apathy Band play The Adelphi on Saturday 2nd September.
There will be a screening of the new Adelphi film at around 8.45pm. 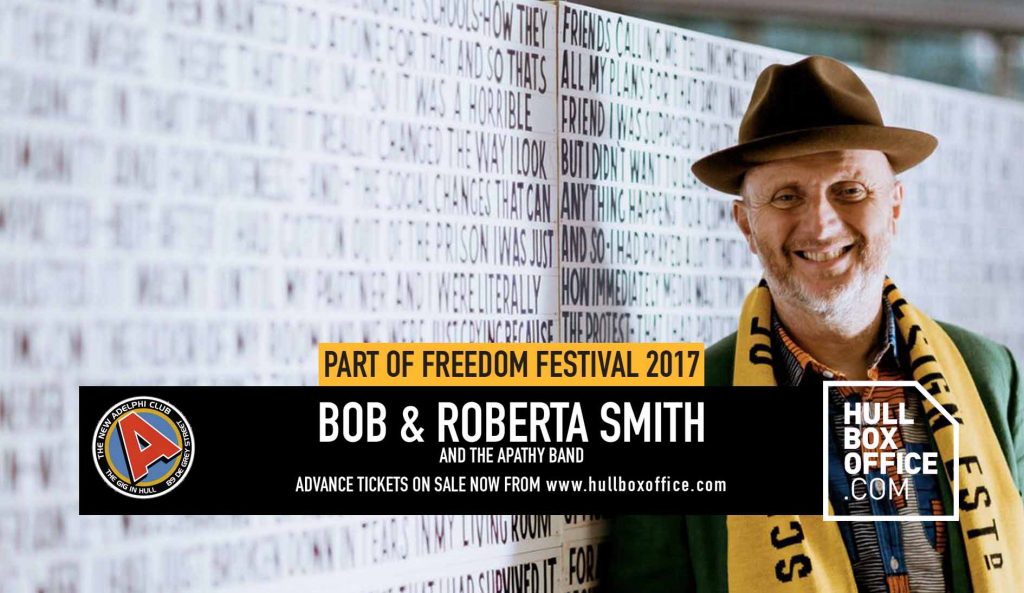