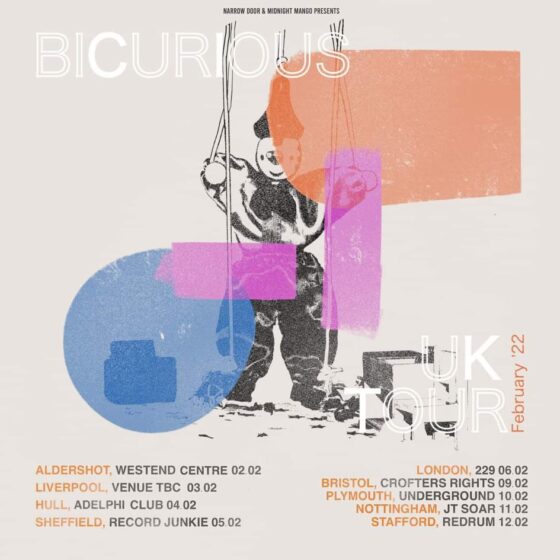 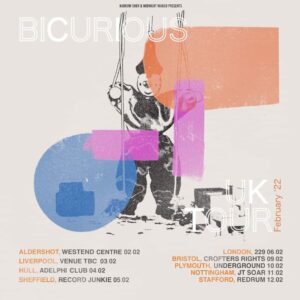 Bicurious are Gavin Purcell and Taran Plouzané; a confused, loud, experimental two-piece from Dublin, Ireland and Brest, France. They’ve built a loyal fanbase through extensive touring and have won over crowds both at home and abroad, establishing themselves as a recognizable force on the European instrumental rock scene. Known for riff sing-alongs, grooves that open up mosh pits and get heads banging, and the undeniable chemistry between the two remarkable musicians, Bicurious have taken their captivating live show from sweaty private rehearsal rooms to festival stages across Europe for the last four years. “Go see Bicurious as a matter of urgency, and wear heavy-heeled footwear”

Bleach Boy are a post-punk/grunge band in Manchester, made up of musicians from different parts of the country: Milo (Nottingham), Tommi (Sheffield), Cian (Birmingham) and Sam (Leeds). In 2017 they began rehearsals in a damp basement in Manchester with the aim of creating an unfiltered and honest approach to their music. More than anything else, Bleach Boy thrive in the live setting, bringing huge intensity and rawness to their audience, with Milo (vocals/rhythm) working his way into the crowd riling them up whilst the rest of the band hunker down in the beat. Bleach Boy have played shows in various UK cities and have supported bands including Surfbort and BAMBARA from New York.