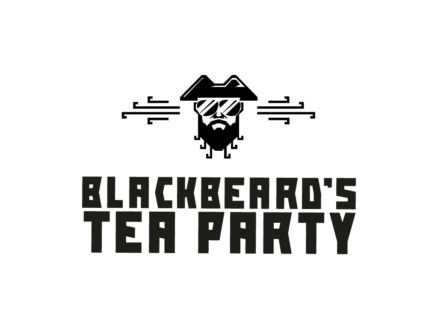 Blackbeard’s Tea Party’s bold and riotous modern folk rock is built for late nights and big stages. Traditional songs and tunes are given a heavy rock edge with earth shattering riffs, playful arrangements and driving dance rhythms.
This is gutsy folk rock dragged kicking and screaming into the 21st Century.
The band celebrate a decade in music in 2019 and will commemorate this with their ‘Ten YAAR Anniversary Tour’ in the Autumn & Winter.
Blackbeard’s Tea Party believe a live show should be a spectacle for the eyes as well as the ears. Outlandish outfits, costume changes, DIY props, unhinged stage antics and chaotic choreography all add up to an engaging, high-octane show that inevitably leaves audiences cheering for more.
Formed in 2009 after meeting at the University in York the group was conceived as a busking band to temper the savage realities of adult life and scratch together some extra pocket money. These sessions would go a long way to inform the later incarnation of the band, frenetic dancing drew bigger crowds in the street and had the added bonus of keeping them warm. Subsisting on a diet of pasties and cheesecake, Blackbeard’s Tea Party quickly developed a fervent local fanbase.
The band members come from diverse musical backgrounds and their list of influences is eclectic. The decision on which songs to arrange as well as the writing of original material is usually lead by Stuart Giddens who is largely informed by folk influences such as Jim Causley, Eliza Carthy, Tim van Eyken, Stan Hugill, Cyril Tawney as well as groups such as Le Vent du Nord.
The contemporary twists that the band places on their arrangements come from a large melting pot of artists from the rock and metal genres such as Primus, Rammstein, Iron Maiden, Tool and Led Zeppelin. From further afield the band takes its inspiration from classic funk groups such as The Meters, the bombastic pop hooks of artists like Beyonce and the dark storytelling style of Nick Cage.
Doors 8 pm