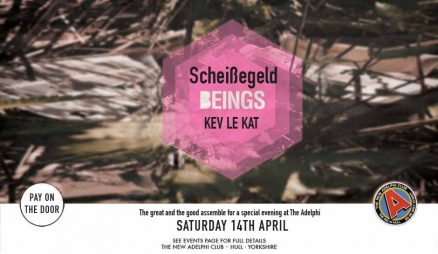 #1 No rehearsals
#2 Record everything
#3 One take, no dubs
#4 Never play the same song twice

SCHEIßEGELD are the latest musical project of HULL musician/producer/ex-FILA BRAZILLIA/SOLID DOCTOR: STEVE COBBY. This seven piece band have a unique musical philosophy and recently played their debut gig at Hull’s New Adelphi Club. This 20 minute documentary by Mark Richardson attempts to capture the musical philosophy of SCHEIßEGELD and contains interviews with Steve Cobby and fellow band members Mike Scott and Paul Sarel. The film also contains live footage from their debut performance at The Adelphi. SCHEIßEGELD are possibly Hull’s most experimental band.
https://vimeo.com/120877472

Beings
The Universe begins. Thirteen point seven billion years later, previously bright stars have used the majority of their fuel and become relatively dim, brown dwarves. Viewing these brown dwarves with an inexpensive telescope from his top floor window on a regular suburban street is a man. He remembers a conversation he had with a friend, via text, about a band called Beings. His friend had heard that they were playing some songs and also previewing their excellent new album at The People’s Republic in Hull on the 8th of February. Thoughts of brown dwarves and of the larger Universe slipped from his mind as he replied with an emoji thumbs-up and a lower case x.
Beings are a band made from former members of Hull’s very own Salako.

Doors 8pm
Pay on the door.