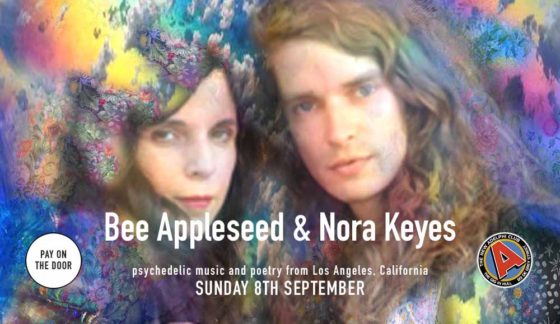 Join us for a night of psychedelic music and poetry from Los Angeles, California at The New Adelphi!

~ Bee Appleseed (psych folk pop) ~
Bee Appleseed is a 21st Century freedom seeker from Portland, Oregon, living in Los Angeles. He’s a singer, multi-instrumentalist, writer, poet, actor, and seasoned vagabond with a treasure trove of home recordings predating his July 2018 debut LP, Backpacker Blues, which he wrote during a three year period of traveling and performing concerts across nearly fifty countries in Europe and South America. In August 2019, he released his debut book of poetry, “Arriving” and will be releasing his next album, “Starflower’s Cosmic Soul” in the Autumn on Baby Robot Records. The music he makes can be described as cosmic rock and roll with roots in American folk music and his concerts are like psychedelic experiences, taking audiences to great heights and depths, usually improvised making no concert ever the same, though rarely do the shows not end with everybody singing along, clapping, and dancing! Bee is a lighthearted entertainer with a golden love for the road and all those open to sharing the journey.

~ Nora Keyes (psychedelic experimental vocal) ~
Nora Keyes is an experimental vocalist, songwriter, painter, and long-standing contributor to the Los Angeles underground music scene. She has developed a unique hypnotic vocal style that is soulful, ethereal, and unfixed in this dimension. Through her solo work and bands Rococo Jet, The Centimeters, and Fancy Space People (collaborating with Don Bolles of The Germs, 45 Grave, Ariel Pink, etc), she has earned a local cult status. Her debut album, Mysterium Tremens (out ‪September 21st) is a sonic journery into the borderlands of perceived reality. Hitting on themes where, synchronicities, de ja vu, mutual dreams, a sense of connection with lost loved ones & visions intertwine. Her projects have shared stages with The Smashing Pumpkins, Love & Rockets, Blixa Bargeld (Einstürzende Neubauten), Ariel Pink, Suicide, David J (Bauhaus), Julia Holter, Quintron, Carla Bozlvitch, Geneva Jacuzzi, & The Sweet.

Together, Nora and Bee have started a record label to put out theirs and other releases called Godyssey Music and are embarking on another European tour performing separate sets and an improvised performance together called Elf Freedom, all of which will be recorded for a live compilation on the label. Audiences are likely to feel elevated, connected, and transformed during this unique cultural experience as the pair bridge the gap between California and the world through layers of cosmic sound.