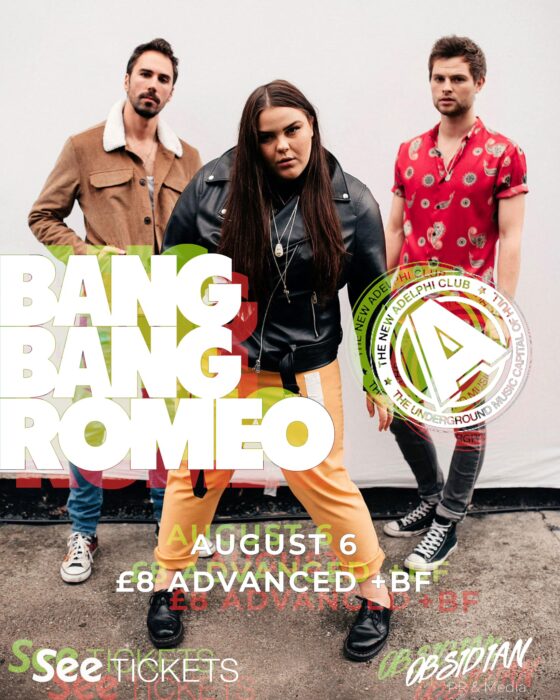 Fronted by vocal powerhouse Anastasia Walker and featuring Ross Cameron (guitars) and Richard Gartland (drums), Bang Bang Romeo are a propelling force for female-fronted bands and an open voice for the LGBTQ+ community.

Anastasia’s “once in 20 years voice” is unrivalled and the group’s larger-than-life performances are sending audiences wild up and down the country, leaving them with jaws dropped or reduced to tears.

2018 saw Bang Bang Romeo play over 150 shows – their main stage-opening set at the Isle Of Wight Festival drew the biggest audience for a first-on act in the festival’s history (according to John Giddings – festival owner). Their other main stage appearances included Tramlines, Victorious, second stage at Kendal Calling, headline slots at Y-Not & Truck and main stage at Doncaster, Cardiff and Leeds Pride.

For 2019 the band joined P!nk on her Beautiful Trauma World Tour – P!nk herself made the selection to include Bang Bang Romeo on the tour and the band played their hearts out to new fans at Wembley Stadium (2 nights) and Berlin Olympiastadion. In 2020 they have played festivals including SXSW and Mad Cool.

“The most formidable front woman I’ve seen, talk about charisma, presence and a voice to match” – Gordon Smart, Radio X