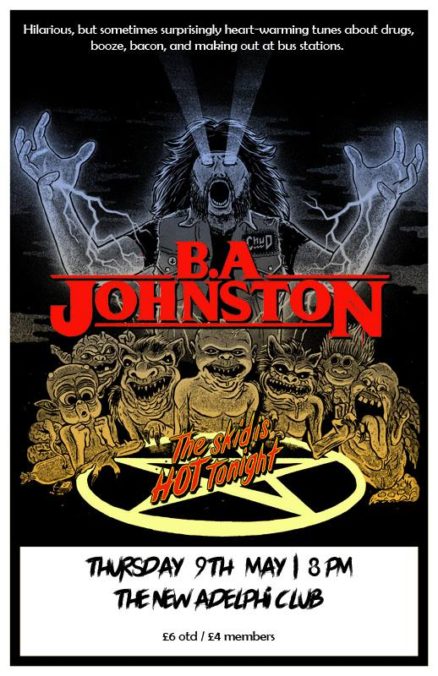 Hilarious, but surprisingly heart-warming tunes about drugs, booze, bacon and making out at bus stations from a blue-collar Hemingway dedicated to documenting the ridiculous shit we get into and up to, but would never admit to.

Canada’s trash poet laureate BA Johnston is back with a new album, ‘The Skid is Hot Tonight’. Johnston’s one- and two-minute songs criticize the awfulness that lies just under the surface of life, like killer commutes, messed up food orders, and losing track of when garbage day is. It is the perfect blend of straight ahead and irreverent rock, serious on delivery and comic in intent.

His live act resembles a Ramones show in its intensity and colourfully scripted performance: every show features sparklers, a captain’s hat, a shirt taken off as quickly as possible, and audience interaction like you’ve never experienced it before, which once seen cannot be unseen.