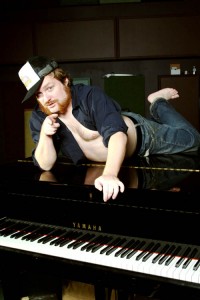 Canadian weirdo genius BA JOHNSTON hits Hull for the first time.
BA Johnston has been playing music in his Canada, pretty much since the dawn of time. He is best known for his hit song “Deep Fryer in my Bedroom” and for once having crashed a snowmobile into the Canadian Prime Ministers pool. He can usually be found in Canada playing in some crappy bar for a nominal cover charge but has decided to branch out and play crappy bars in other countries. So get ready for a non refundable night of entertainment that has been described by Canadian media as “not for everyone”.
Shirtless and self-deprecating, his incomparable performances have earned him a rabid cult following of devoted and only moderately deranged fans, who come back time and again to revel in the sweat and beer-soaked, simultaneously self-abusive and joyous insanity of a BA Johnston show.
Doors 8 pm
Pay OTD
This website uses cookies to improve user experience. Please confirm that you accept the use of cookies. More information can be found in our cookies policy. Find out more.