An Evening of Interesting Folk with Crooked Weather

Crooked Weather come back to the depths of East Yorkshire, where they will be returning to The New Adelphi Club to close their 6 month antipodean Paper Roads tour. To be joined by the local finger picking bard (and his band!) Jody McKenna and West Yorkshire based old soul Henry Parker. 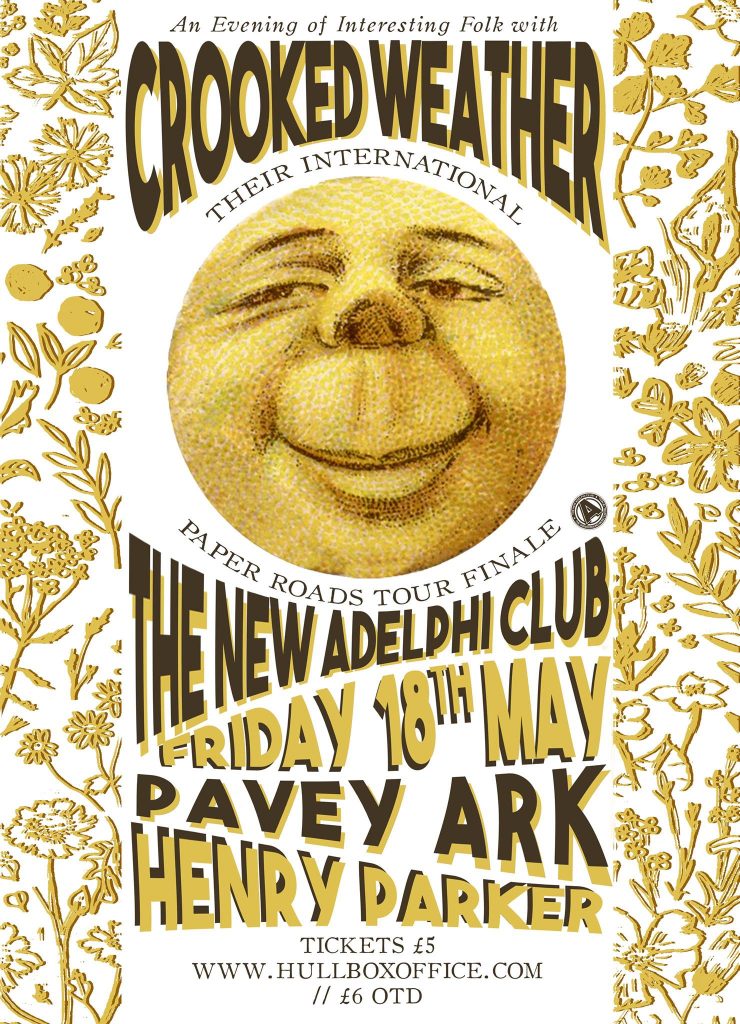 Crooked Weather
Crooked Weather are a rock infused folk band, based out of a tragic mustard 1979 campervan. They hail from the depths of East Yorkshire, with the lilting harmonies of Holly & Will at the core. Their original music, steeped in the folk revival of the late 60’s, has a raw, modern edge, augmented by Tom and Dave: a fierce rhythm section.

Jody McKenna
Hull’s own guitar picking bard, Jody Mckenna, is a humble and honest poet, delivering beautifully crafted acoustic music inspired by songwriters of all eras, from Dylan to Bright Eyes. He’ll bring you along a Dylan-esque folk train, pulling in modern sounds of big drums and guitars then stripping back to one man and his voice.

Henry Parker
With a sound rooted in the haze of the English folk revival, Henry Parker takes up a style crafted by players such as Bert Jansch and Nick Drake in the 1960’s. The open tuned acoustic calls to mind ‘Folk-Baroque’, a term once used to describe all those who followed in the footsteps of the great originator Davy Graham. While his songs and tunes arrive either worked from his own hand, or are borrowed and developed from the traditional British folk cannon. Those that have seen him perform on a hollow-body electric guitar, understand the influence and impression that modern jazz has made on his music.

An event NOT to be missed, held at Hull’s underground music capital The New Adelphi Club.