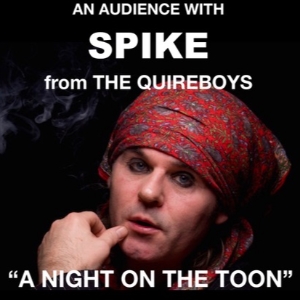 An Audience with Spike from The Quireboys

SCREAMING TARTS PRESENTS…
An Audience with Spike from The Quireboys
Thursday July 29th 2021. The New Adelphi Club, Hull.
From a career starting in the 1980’s when a 17 year old Spike journeyed from Newcastle to London to find fame and fortune, formed The Quireboys, were managed by the whirlwind that is Sharon Osborne, a first album debuting at number 2 in the UK Charts, toured with Guns and Roses at Axl’s request, and had a home coming party with The Rolling Stones at St James Park…. and then playing to 50,000 at the Tokyo Dome, Japan. Spike has a hard earned reputation for partying!
This special intimate show comprises of two 45 minute sets on a stage stripped down to Spike, his guitar, songs and stories from his wild life in rock and roll. The highs and the lows. His honest and forthright look and his and others life in a modern day musical circus.
These are intimate and up close and personal shows – Don’t miss it!!
Book here >>>
https://www.seetickets.com/…/the-new-adelphi-club/1954421