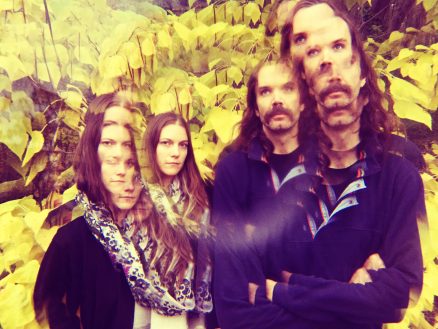 A Hawk And A Hacksaw + Mambo Jambo

For more than a decade, the duo known as a Hawk and a Hacksaw have been exploring the traditional music of Eastern Europe from a distinctly American folk-pop perspective. Though the accordion player Jeremy Barnes was formerly the drummer in Neutral Milk Hotel, and the violinist and pianist Heather Trost played on Beirut’s first two records, their inspiration now comes mostly from places like Hungary, Romania, Bulgaria and Macedonia.

A Hawk and A Hacksaw return with new record ‘Forest Bathing’ this year, inspired by the Japanese medical term Shinrin-Yoku (translating as ‘taking in the forest atmosphere’). It was developed in Japan during the 1980s and has become a cornerstone of preventive health care and healing in Japanese medicine. Their forest bath of choice is the Valle De Oro National Wildlife Refuge in New Mexico.

The album features ten original compositions. The Persian Santur, an ancient type of dulcimer struck by sticks, and played by Barnes, is a feature component along with Trost’s soaring and diving violin. The duo play nearly every instrument, but have some wonderful guest musicians on a few tracks- Turkish clarinetist Cüneyt Sepetçi, Hungarian cimbalom master Unger Balász, Chicago trumpeter Sam Johnson, who often tours with the group, Deerhoof guitarist John Dieterich, and New Mexico bassist Noah Martinez of the band Lone Piñon.

The band has always had a bird’s eye view of this part the world- looking for the connections between places and even eras…a belief in the power of music to reach across borders and unite. If one were to listen to Forest Bathing with no knowledge of who the musicians were or where they came from, a variety of results certainly wouldn’t include two American musicians from Albuquerque, New Mexico. But it’s important to the band that you know where they are from.

Support tonight is from acoustic roots duo Mambo Jambo, who  might just be the biggest acoustic duo you’ll ever see; a truly unique two-piece they’ll take you on an exciting and joyous musical journey bringing together sounds from roots, world, folk and jazz, plus their own compositions. With Frankie on sax, vocals, clarinet, flute, guitar and percussion and Pete on guitar, vocal, ukulele, tres (traditional Cuban guitar), banjo, accordion and suitcase! Pete and Frankie have been gathering admirers at shows and festivals the length and breadth of the country. A fabulous musical treat is in store wherever they roll up, their tour bus packed to the brim!

“Musical sunshine from a multi-talented and multi-instrumental duo. If they cannot put a smile on your face and set your feet tapping you may be beyond therapy.” Junction Inn, Leeds Gig Guide