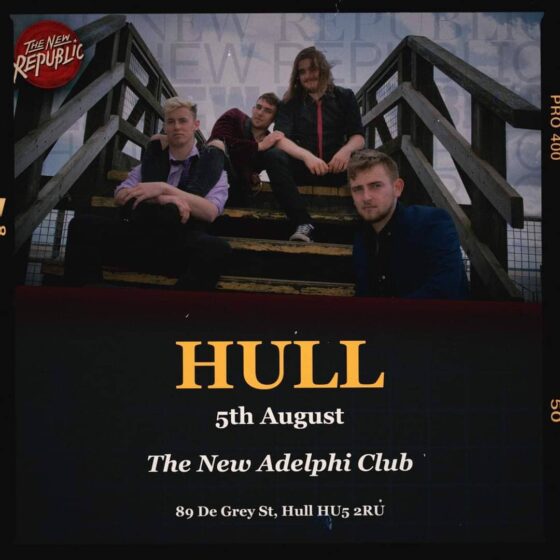 Punchy riffs. Groovy licks. And bags of infectious energy. The New Republic welcome a breath of fresh air to the indie rock scene with one goal in mind – to get people dancing.
Stemming from East Yorkshire, with a strong fanbase in the Birmingham region, the band combines the funky backbone of the Red Hot Chili Peppers with crisp, catch melodies reminiscent of The Strokes and Foals. It’s this unique, hypnotic sound that has earned them multiple gigs at O2 Academy venues, as well as slots at various festivals including Hull Trinity Festival and Tribfest. Not to mention their success in winning Viking FM’s ‘Big Audition’ battle of the bands competition in 2016.
But what makes this band really stand out, is their enormous stage presence. And the exotic acting and drama world that surrounds frontman, Sam Waites, drives this to unparalleled heights. Along with his iconic vocal melodies and crunching rhythm guitar-playing – he creates an electrifying atmosphere in every performance.
Providing the je n’ais ce quoi is lead guitarist, Michael Hebdon. Unleashing no-nonsense riffs and sweet, soaring melodies, he transforms the hard-hitting rhythm track into a multi-layered masterpiece.
Every bassist is a wildcard – and the wacky antics of Tom Harteveld never go unnoticed on stage, as he holds his tight and catchy groove to form the band’s funky foundation.
And, at the heart of the rhythm, is the mystery man Sam ‘Drummer Sam’ Evans. Often noted for delivering the piercing punch of the band in bewildering, effortless fashion, his advanced musical brain offers a secret weapon to the table.
With two EPs under their belt already, the groovy hit single ‘Rose Marie’, and a shed-load of new material on its way, The New Republic are eager to share their music with lovers of the dancefloor. And their mesmerising sound will ensure you can’t resist the toe-tapping temptation.
The Borders
Four piece indie band  from Derby formed by the Singer/Songwriter Joe Turner in 2019. Currently writing and recording their debut EP. This is their debut Hull show.
With a classic original British rock sound, ear worm hooks and powerful lyrics. Influenced by Arctic Monkeys, Catfish and the Bottlemen, The Killers and Kings of Leon.
Nicole Fewster
Singer-songwriter from Hull.
In Nicole’s own words,
“I’m a singer song writer, I am heavily influenced by Lana del Rey, Jake Bugg and Lorde. I like to tell stories in my songs to relive experiences and to tell people about things that have happened in my life. I’d say my style is indie and soft indie with a hint of folk, I like to take inspiration from all genres as they all create music in such different ways. I’ve been songwriting properly since I was 15 and have developed my style since”.
This website uses cookies to improve user experience. Please confirm that you accept the use of cookies. More information can be found in our cookies policy. Find out more.