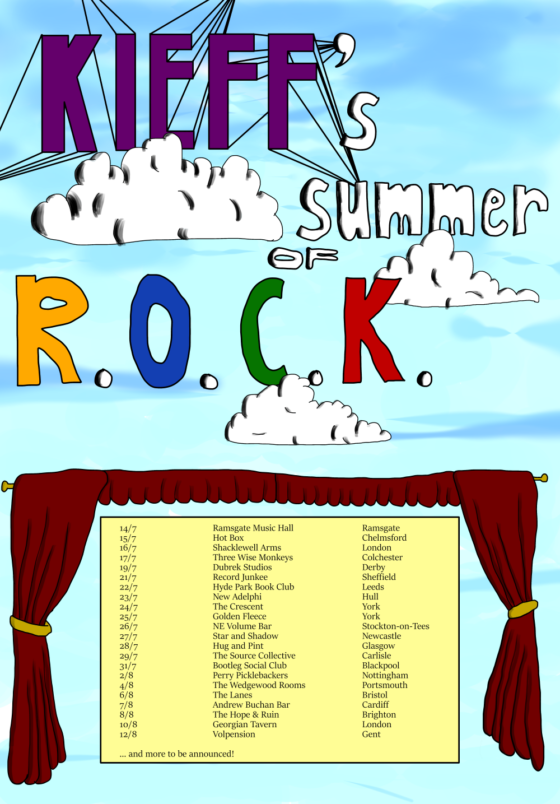 Post-punk minded quartet KIEFF combine their love for sonic onslaught, chaotic harmonies and the unusual to create exuberant and fierce songs. Strung out with wiry guitar and incisive rhythms, their approach is mostly
filled to the brim with opulent ideas and playful melodies to round off their boundless compositions.

Founded in 2018, Scum are a three piece punk band from Leeds, Uk. After meeting in
school aged 12, they have gone on to make a name for themselves in the Leeds music
scene playing venues such as the Brudenell Social Club as well as being amongst the
youngest to have played Leeds and Reading festivals.
With a varied range of influences, Scum have been described as sounding like ‘the nagging
repetitions of The Fall mixed with the fury of Black Flag, played at 100mph’.
Scum are: Ezra Glennon on bass guitar and vocals; guitarist and vocalist Spike Elwell; and
drummer Ben Parker.
Their second EP, ‘For Health and Well-Being’ was written gradually starting in the back end
of 2020, not being recorded until autumn the following year. After Ezra’s spoken word intro,
the EP’s four track critique consumerism, anti vaxxers, and the people whose very existence
will piss you off. ‘For Health and Well-Being’ arrives July 22nd, 2022.

A new band from Selby playing their debut show.

Taking their range of influences from such bands as Frank Carter and the Rattle Snakes, Idles, Royal blood ,Foo Fighters and Aerosmith.
A post punk band, who live and breath rock and roll, with a punk attitude.