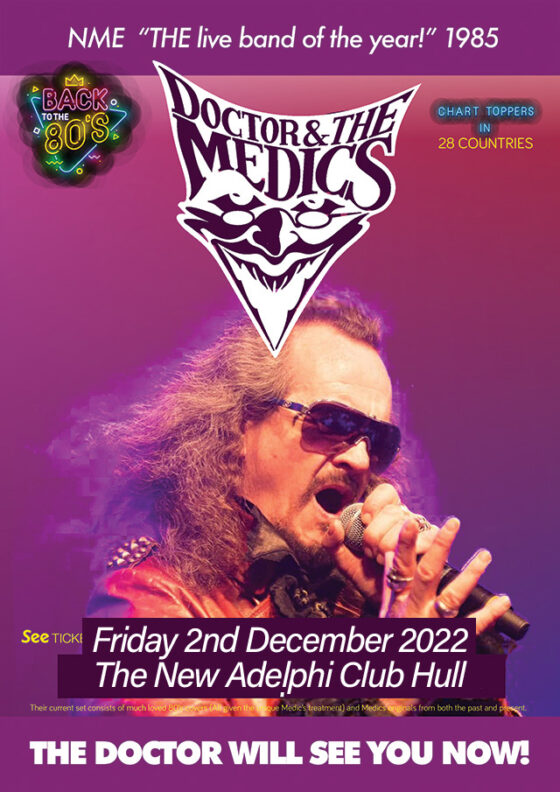 Doctor and the Medics + support

Screaming Tarts presents…
Doctor and the Medics + support
Friday December 2nd 2022.
The New Adelphi Club, Hull.Dr and the Medics were created in 1982 at the dawn of the 80’s by The Rev Dr Clive Thomas Jackson. He was DJing at the time at his phenomenally successful soho nightclub “Alice in Wonderland,” under the name of “The Doctor”.As the band were only formed to win a £5 bet and do one show they used the first name that came into their heads, hence “Dr and the Medics!”

However, one gig to led to another and they soon discovered that their unique blend of Psychedelia, Glam and Punk Rock was finding an ever increasing audience. So much so that by 1985 The NME named them as “THE live band of the year!”

1985 also saw them top the then highly respected Indie Charts, with their “Happy but Twisted” E.P.

The band’s next chart success saw them top the charts in the UK and 28 other countries with “Spirit in The Sky”, their signature tune and the song that they are best known for the World over.

Often seen as One Hit Wonders the band did get to number 22 with their next single “Burn”, however The Dr still likes to wear his “One Hit Wonder” badge with pride, making them the only One Hit Wonder to have had 2 hits!

Their current set consists of much loved 80’s covers (All given the unique Medic’s treatment) and Medics originals from both the past and present.