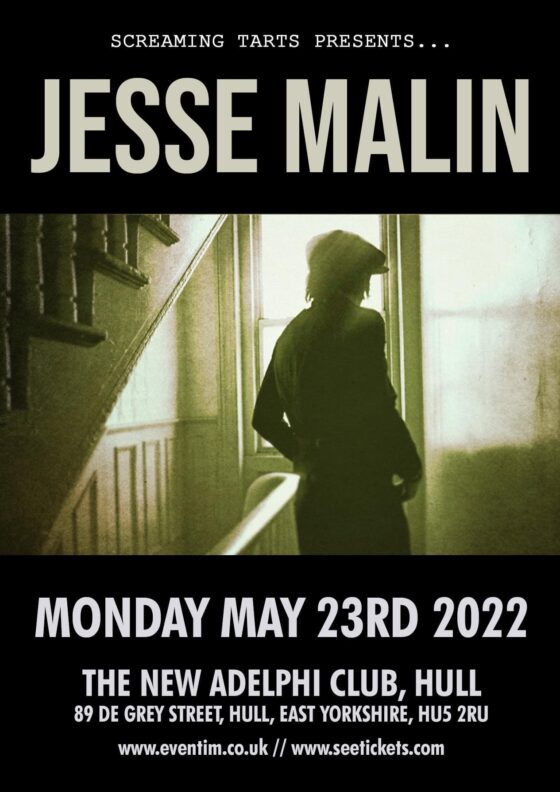 SCREAMING TARTS PRESENTS… Jesse Malin.
Already a veteran of the NYC hardcore scene by the time he was a teenager, Jesse Malin first rose to fame with the influential punk band D Generation, a group Rolling Stone called ‘the best thing to happen to New York noise in the Nineties’.

Malin traded in his electric for an acoustic in 2002, though, shedding his skin and embarking on an acclaimed solo career with his Ryan Adams-produced debut, ‘The Fine Art of Self Destruction’. Hailed by Uncut as ‘an instant classic’, the record was stripped-down, raw, and intimate, earning comparisons to Neil Young and Tom Waits for its ragged, poetic beauty. In the decade-and-a-half that followed, Malin would go on to blur the lines between singer-songwriter and punk rocker with a string of similarly celebrated solo albums, including his latest effor ‘Sunset Kids’.

The record explores the bittersweet as well as topics more upbeat, with Jesse’s street-smart writing style acting as the thread weaving indie rock, folk and heartland Americana together. In ‘Sunset Kids,’ the genres and influences gel and Jesse Malin steps assuredly into the role of street-savvy, roots-minded songster.

Tickets £15.
https://www.seetickets.com/…/the-new-adelphi…/1520704
All original tickets remain valid for the new date, refunds available for those unable to attend.
This website uses cookies to improve user experience. Please confirm that you accept the use of cookies. More information can be found in our cookies policy. Find out more.