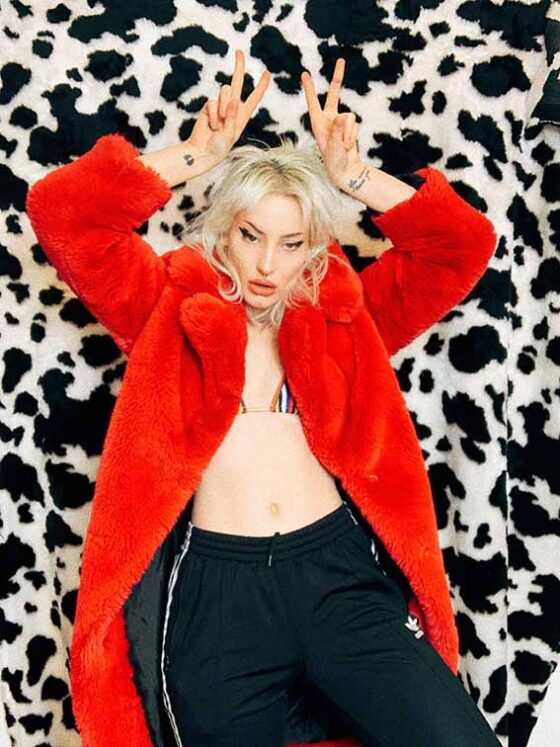 Under the Influence presents
DU BLONDE
Tuesday 1st February 2022
The New Adelphi Club – Hull
Doors 20.00HRS / £12.50 ADV
https://www.seetickets.com/event/du-blonde/the-new-adelphi-club/2143431Du Blonde is back with new album ‘Homecoming’ and with it, her own record label, clothing brand and all-round art house Daemon T.V.

‘Homecoming’ began as a few songs hashed out on a porch in LA in early 2020, and as Houghton’s desire to create something self-made and self-released merged with the oncoming pandemic, Beth found herself recording the entire album in her bedroom in London, drinking coffee until 4am and chain smoking cigarettes (which she insists she has now quit).
“I started writing this record in December last year. I was renting a room in LA from my friend and I was having a pretty bad time. My anxiety and depression were at a point where it was a struggle not to cry while ordering a sandwich. I’d gone out there to write, and once I got there I found out my guitar had been stolen and I couldn’t afford to buy a new one.” A saviour emerged in the form of Jeff Garlin (the gravel voiced star of The Goldbergs and Curb Your Enthusiasm). “My friend Ezra Furman had a show at Largo in Hollywood and the three of us were in the green room when Jeff heard my guitar had been stolen. It turns out he’s a huge guitar nerd, we’re both into classic rock, and so he helped me out and provided me with a guitar to write the album with. He brought it round to my house and as soon as he left I wrote ‘Undertaker’ and the rest of the songs followed just as quickly. I think it’s a magic guitar.”

Fans of Du Blonde’s previous two studio albums (2015’s ‘Welcome Back to Milk’ and 2019’s ‘Lung Bread for Daddy’) might be surprised to find that ‘Homecoming’ takes on the form of a pop record. The garage rock, grunge and metal guitar licks that have come to define Du Blonde are still there in spades, but as a whole the direction of the album is pop through and through. Is this something Houghton expected? “Not at all! When I began I was making a kind of bedroom garage rock record, guitar, bass, drums and some lo-fi recordings. But as the pandemic hit I started to build up my home studio and suddenly I was back where I was at 16 writing [debut album] ‘Yours Truly Cellophane Nose’ with access to synth and piano and strings. I eventually came to accept that what I was making was pop music, and I wasn’t going to fight it anymore. Yeah I love AC/DC, Black Sabbath and Ty Segall, but I also love Britney, Rihanna and The Spice Girls.”

Houghton’s freak flag is still flying high however, a fact that’s no more apparent than on ‘Smoking Me Out’, a bizarre mash up of 80’s shock rock, metal and 60’s pop group harmonies. Opening with a horror dialogue befitting of halloween (“You sick fuck / together we’re just two sorry burgers of human meat”) the track sees us cowering in Du Blonde’s underground lair as the singer chastises the listener for not loving her like she deserves. As we reach the end of the verse however, an evil cackle makes way for a cascading and driving chorus so melodic it wouldn’t be out of place on a family friendly TV show from 1964. ‘Smoking Me Out’ is a song of opposites. The song began as a chorus and it stayed that way for a long time. “I kept going back to it but every time I tried I’d write a verse that kind of just fit with the overall vibe and I wasn’t feeling it. It got to the day before we were going to mix the record and I thought ‘fuck it, let me just put an octave pedal and some distortion on my voice and see what comes out’. The spoken lines you hear in the verses are the first takes I did, totally ad-libbed. When I got to the line about leaving the towel in the shower I was in hysterics like, ‘what am I even saying?’ But when I heard it back I just thought it was perfect. Those lines on ‘Smoking Me Out’ are probably more indicative of my true nature than anything I’ve ever made. I have ADD and spend most of my time alone talking to myself in bizarre voices. My entire relationship with my mum is me talking to her in a New York accent or singing to her about how her hair is so shiny.” This same attitude can be heard throughout ‘Homecoming’, whether writing about her medication (30mg of citalopram, once a day), her queerness on ‘I Can’t Help You There’ (“I’ve been a queen, I’ve been a king, and still I don’t fit in”), to the joyous and manic explosion of ‘Pull The Plug’ (“say that I’m deranged, but I’ve been feeling more myself than ever”), Houghton is nothing if not herself, full force and unapologetic in her approach to writing, playing and recording her music. In the time since the 2019 album ‘Lung Bread For Daddy’ hit the shelves, the garage rock musician has pulled an essential about-turn. Having released albums with record labels throughout her 15-year career, the lack of control over her work and career saw her mental health deteriorate. “I’ve always felt that the music industry as it stands is weighted more towards record labels than artists. There’s an element of gaslighting involved, a whole ‘you’ll be nothing without us’ vibe that keeps you in the system because you think you might fail without it. But I woke up one day and was like ‘I’m broke, I’m stressed and depressed, I don’t own the rights to my music and I have to buy my own albums for
close to full price if I want to sell any at my shows’.” “All of this on top of having to fight tooth and nail to be allowed to represent myself as I am and not some middle class, middle aged white guy’s idea of who I should be. I remember a while ago, I’d made this video game (GardenBoy – a video game designed and built by Beth and long time collaborator Zach Bodtorf) and I showed it to someone at a company I was working with – bearing in mind I’ve been making this game for years, Zach and I taught ourselves to code and I built a PC from scratch to deal with the processing power and memory needed to house the game – and the only thing the guy said was “your avatar will need a sports bra if it’s going to do all that running”. And I thought ‘what the fuck am I doing here’”. And so, Daemon T.V was born. Originally created as a platform for Houghton’s clothing designs (she had planned to be a fashion designer before ‘accidentally’ becoming a musician at 15), the decision to also turn Daemon T.V into a record label seemed like a natural progression. “For a long time I’ve wanted a platform for my artwork, clothing and any weird EPs I might make outside of the Du Blonde name,” Houghton explains. “When I was a young kid I planned to open a record store with a bagel counter. I was like ‘I like records, I like bagels, here’s both’. So in a way Daemon T.V is just that, except it’s record releases, clothing and gross sculptures made of human hair. I had already made a lot of the clothing by the time ‘Homecoming’ had been recorded, so I felt like having my own platform to release the record from seemed like a good way to introduce both the album and Daemon T.V to the world.” If we’ve learned anything from Du Blonde so far it’s that she’ll never stay in one place for long, and ‘Homecoming’ will be a work of its own and not an indication of a permanent shift in musical direction. So, is pop here to stay? “God no, my next record is happy hardcore” she grins. 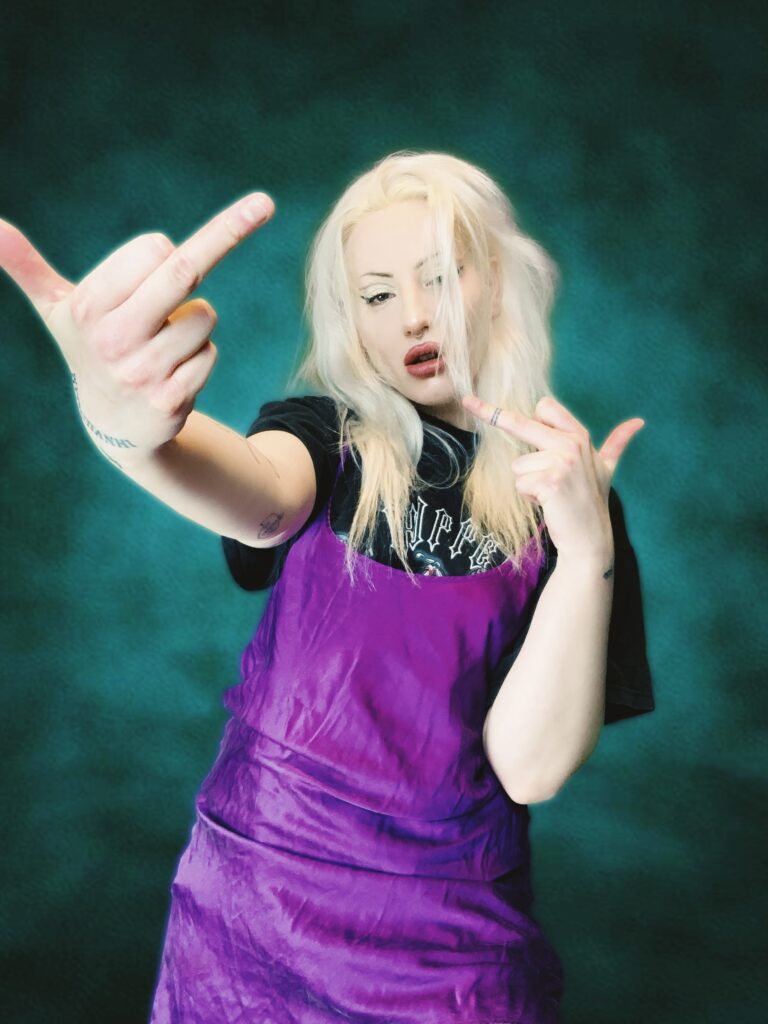