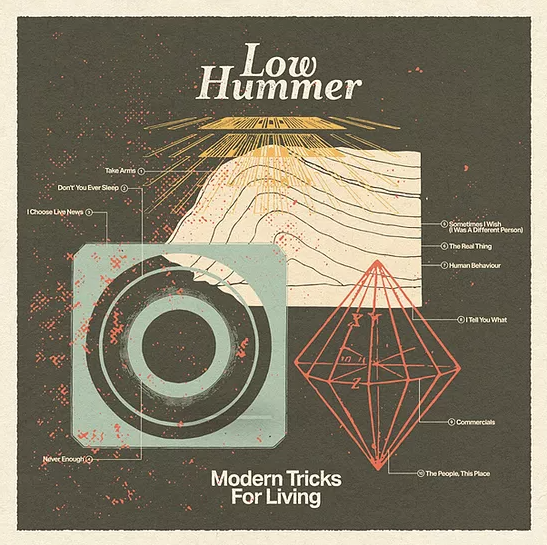 This album is available to pre order

“Released on Leeds-based Dance To The Radio, ‘Modern Tricks For Living’ is the righteous, ebullient debut album from Hull six-piece Low Hummer. It’s spearheaded by the ennui of lead single ‘Never Enough’, which sees the band incorporate shoegaze influences into their sparky garage-rock template”.

FOLLOWING bdrmm into the annals of East Yorkshire’s new wave of dark, glamorous guitar royalty in waiting are Hull’s Low Hummer, who’ve finally announced their much-anticipated debut album, Modern Tricks For Living, to be released as the leaves began to fall and the fruits ripen.

Ahead of that album they’ve released a new single, “The People, This Place”, a rush of post-punk chanting and riffing that’s pretty much nailed on to close stages at festivals in the future, a torch song for the alienated, the seeking, those dreaming of brighter lights.

Originally conceived by singer-guitarist Dan Mawer as he was driving around Hull humming the tune that was to become the song and observing his home city, it reflects on the conscious and unconscious decisions we all make every day that effects those around us in ways we will never truly know.

That album, Modern Tricks For Living, will be released on Dance To The Radio Records on September 17th. In line with what the band have produced so far, expect the record to be thoughtful, observational – witness their melodically brilliant exposition on locked-in syndrome, “Never Enough”, their single from February, for further evidence.

Dan says: “We can’t wait to release our debut album! Our album of isolation during such overwhelming times. The record captures how us bunch of misfits have felt isolated from popular culture, isolated from love, and how we all have been getting through physical isolation!

“Modern Tricks for Living does not provide any kind of wisdom for navigating through modern society, but maybe just shows how a bunch of strangers from Hull get by. “The People This Place” was the final piece we needed to make Modern Tricks For Living complete, so it feels like the song to launch the album with.”

Dance To The Radio originally launched in 2005. The Leeds based indie label is responsible for seminal released from artists including The Pigeon Detectives, ¡Forward, Russia!, ILikeTrains, Sky Larkin and many more, acting as the leading light for Leeds’ legendary independent music scene in the mid 2000’s.