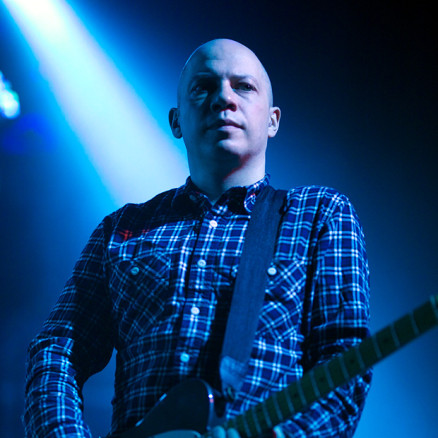 Mogwai. His Grandad was from Hull! A rare opportunity to see Mogwai’s lead guitarist and vocalist at close quarters performing an acoustic solo set. Mogwai headlined the second stage at Glastonbury in 1999 and subsequently returned in 2003 and 2014.
“Pioneers of post-rock electronica, Mogwai come to Pilton ready to give your eardrums a workout with incredibly delicate melodies wrapped in a blanket of pure, unadulterated noise. Recent work sound-tracking cult French drama Les Revenants has seen their instrument-led soundscapes reach a whole new audience, 20 years after their acclaimed first album Mogwai Young Team.
Latest release Rave Tapes hit the floor last October and saw the John Peel approved Glaswegians play two nights at the Royal Albert Hall to an enraptured crowd. Put down your microphones and whack up that distorted guitar for an intense Saturday night lost in the magic of Worthy Farm.” BBC
In July 2013, Mogwai performed their soundtrack to Zidane: A 21st Century Portrait for the first time at dates across the UK. An announcement of new live dates followed, including two nights at the Royal Festival Hall, and an appearance closing the final holiday camp edition of the “All Tomorrow’s Parties” festival in Camber Sands, England.
They announced their eighth studio album Rave Tapes on 28 October 2013. The album was released on 20 January 2014 on Rock Action in the UK, Spunk in Australia and Hostess in Japan and South-east Asia, while Sub Pop released the album in the US on 21 January. Rave Tapes was produced by Mogwai and Paul Savage, and the song “Remurdered” was uploaded to the Rock Action and Sub Pop SoundCloud pages at the time of the announcement. The album entered the UK album charts at No.10 and as of April 2014 was the best selling UK album released in 2014 in terms of vinyl sales.
RM Hubbert We welcome the return of Hubby to Hull. “A tattooed bear of a man who admittedly makes music “strangely inappropriate for the way I look”, RM Hubbert emerged from the same 90s scene as Arab Strap with post-rock band El Hombre Trajeado, before several years spent away from music facing personal demons. His Alex Kapranos-produced debut album Thirteen Lost & Found and its follow up Breaks & Bones document dealing with chronic depression and the death of loved ones – how else but by learning to play a mean flamenco guitar.” Malcolm Jack The Guardian
“Hubbert’s live shows provide the rare spectacle of a noisy rabble falling instantly silent to marvel at both his technical ability and the emotional impact of his music” The Scotsman
“Hubbert communicates all manner of emotions and stories through his own beautifully lush and percussive playing style” The List
“Thirteen Lost & Found is further evidence, basically, that we should really start taking more notice of the talents of RM Hubbert” The Line of Best Fit
“RM Hubbert is a fascinating and talented guitarist” Drowned in Sound
Tom Skelly Described as ‘Beachcomber folk blues from the East Coast’ Tom’s music captures the solitude of East Yorkshire and the dark places his mind takes him. As a solo artist Tom has the ability to hypnotise the listener using slow moving repetition in his music as a backdrop to his deep, dark and moody vocals.
Since his debut album ‘Wait For This Day To Grow Old’ Tom has gained many followers in the UK and internationally, receiving BBC airplay, soundtrack work for French TV and many festival slots.
Tom is now working on his next vinyl only release to coincide with his first solo tour.
“Tom possesses that rare and enviable quality amongst singer songwriters to truly capture and enthrall an audience. His raw soulful delivery of sincere and insightful self-penned songs takes the listener on an epic journey into the eye of the storm. A burning young talent already causing waves on the Hull music scene and whose course is set for a bright future.” Dave Gawthorpe Hull Folk Festival
“It’s not easy saying a few words about Tom Skelly when so much springs to mind. First is the voice, an amazing instrument that covers all bases from haunted and tremulous to soaring and powerful. At times sounding like a cross between Jeff Buckley and Richard Hawley, it’s reminiscent of the East Yorkshire coast which is his home, with the ripples of the sea gently drawing you in along the beach before some great roller sweeps you away. Then there’s the music, complementing the voice whether it’s solo acoustic or full band, adding persuasion, gravitas and substance. The eerie beauty of the stripped back songs in a hushed hall, watching and hearing someone totally immersed in his own craft proved irresistible.” Dave Hammond Cambridge 105.FM