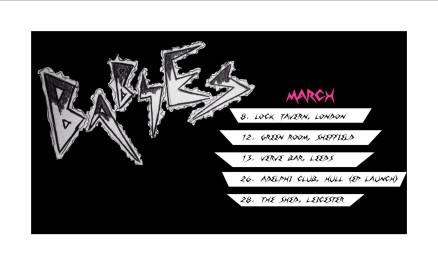 YEYEY WE’RE STOKED TO BE ANNOUNCING OUR EP LAUNCH PARTY AT ADELPHI!!!!!!
WE HAVE SOME ACE SUPPORTS ASWELL, CHECK IT
£4 OTD/£3 GUEST LIST (Post name on wall)BABIESHull three-piece BABIES, are a nice blend of indie low-fi and surf music infectiousness that fit nicely in the new UK indie scene.The band’s sound lies somewhere in between PALMA VIOLETS and SPLASHH, with some old-school indie aspects thrown in, as the pounding un-refined bass is reminiscent of JESUS AND THE MARY CHAIN. BABIES’ songs are full of energy which will transfer nicely into their live shows.
After 2 months, they released debut track ‘2048’ which gained a lot of attention from many online blogs (7Bit Arcade, RADSOUND, p0nd, jamjamjammmm) and gained interest from numerous record labels such as Island Records, Birthday Records and DirtyHit
They then proceeded with their first little set of dates (London, Bath, Sheffield, Manchester, Leeds and of course HULL CITY OF CULTURE 2017!!!!!!!)
They have gone on to release 2 more songs (PLUSH and most recently MAKEOUT/BREAKOUT) which we recorded at Beat Street Studio’s, Leeds. They have also had radio play on BBC Radio Introducing and Amazing Radio, who named 2048 Record of the Week and have featured us on the weekly Freeloader Podcast twice.
They are set to release their debut EP (SINK) on iTunes/Spotify/Amazon on March 2nd, which has already sparked interst from writers of NME & DIY Magazine.

OEDIPUS THE KING
Oedipus the King’ are an eclectic four piece alternative rock band based in Hull. Oedipus formed in late 2011 through a love of the obscure and making really, really loud noises.
Their influences stem from a plethora of places; including the music of Explosions in the Sky and Modest Mouse, to mixed media such as; art and films, which they make use of during live shows with curious samples and visuals. Oedipus mix an array of cinematic and expansive sound-scapes, with a haunting and diverse alt rock sound.
Oedipus’ debut EP ‘Colossus’ was released in 2012 and their long awaited follow up ‘Budapest’ was released through Warren Records in November 2015

TRASH
Formed a year ago in Chesterfield, which they’ll tell you is “near Sheffield”, TRASH have been busy building a great reputation on the live circuit in their almost ­hometown and beyond.
2014 saw the band go from one unforgettable gig to another, making time between a near constant flow oflive sets to appear on bills with the likes of fuzzy, lo­fi favourites Happyness, Northside, John Power..They then kickstarted the new year with a sold out show at The Rocking Chair, with a celebrated set thatcemented them as true crowd­pleasers.

TRASH’s growing success on the live circuit has allowed them to explore and showcase the fully fledged,reverb­drenched sound that they established on their debut EP Pretty Swish and standalone single Hot Coffee.The two releases have gained interest from all corners of the industry, as well as valuable appreciation fromthe general public. One Facebooker called their latest sigle an essential listen and “the indiest indie” he’sever heard, whilst each track has also received coverage from a number of blogs and radio stationsincluding BBC Introducing and Amazing Radio.

The latter recently playlisted Hot Coffee following an increasing amount of airtime.The band hope to make the next year just as memorable as the last and have made plans to record theirnext EP in April, with their eyes set on a new release just in time for summer.

KEV LA KAT
Kev La Kat’s ‘Love Our Records’ record label releases free downloads weekly. Featured as the ‘Label Of Love’ by Huw Stephens on BBC Radio 1 and regular blog love from Welikeitindie, SB.Tv, Repeat Button, The Sound Of Confusion and The Get Downnn. Contributor for Grammy blogger Kick Kick Snare.
We’re stoked to say that he will be performing a set for us, feating tracks he’s produced for numourous artists around the world and improvising with god knows how many different instruments.